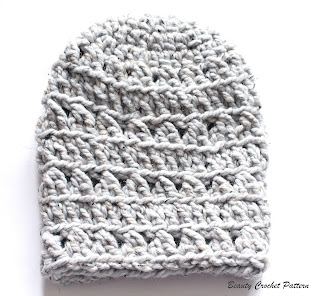 Traditionally in December I post a free pattern which is easy to make and is suitable to be a Christmas gift. This year it is a chunky slouchy hat. You can make the hat for women and for men,too. The hat is stretchy and comfortably fits all adult sizes. For girls you can decorate it with some flower, bow, beads or pompom. All you have to know are basic stitches. The pattern is written in Standard American Terms.

HOW TO MAKE BPsc : Insert hook from back to front to back around post of corresponding stitch below, yarn over and pull up loop, yarn over and draw through two loops on hook.

Like my FACEBOOK PAGE and stay tuned for more free patterns!
I wish you all a very Merry Christmas!!!!!

Girl size 1-2 years Girl's Striped Sleeveless Top is made from two single parts. Both parts are crocheted from bottom... 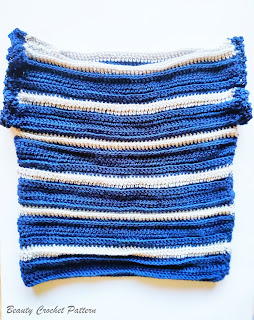 Beauty Crochet Pattern
I am a mom of a daughter .My mother taught me to crochet and her,her mother.And in this way - five generations back.Someday I hope my daughter loves to crochet,too.All my designs are made with love to details.My little princess is my inspiration every single day.Thanks to stopping by !